Kadvi Hawa is a 2017 Hindi film directed by Nila Madhab Panda, with Sanjay Mishra, Ranvir Shorey, and Tillotama Shome in lead roles. The film is based on climate change and the way it impacts the farmers in Mahua, an impoverished village where the land has become barren. 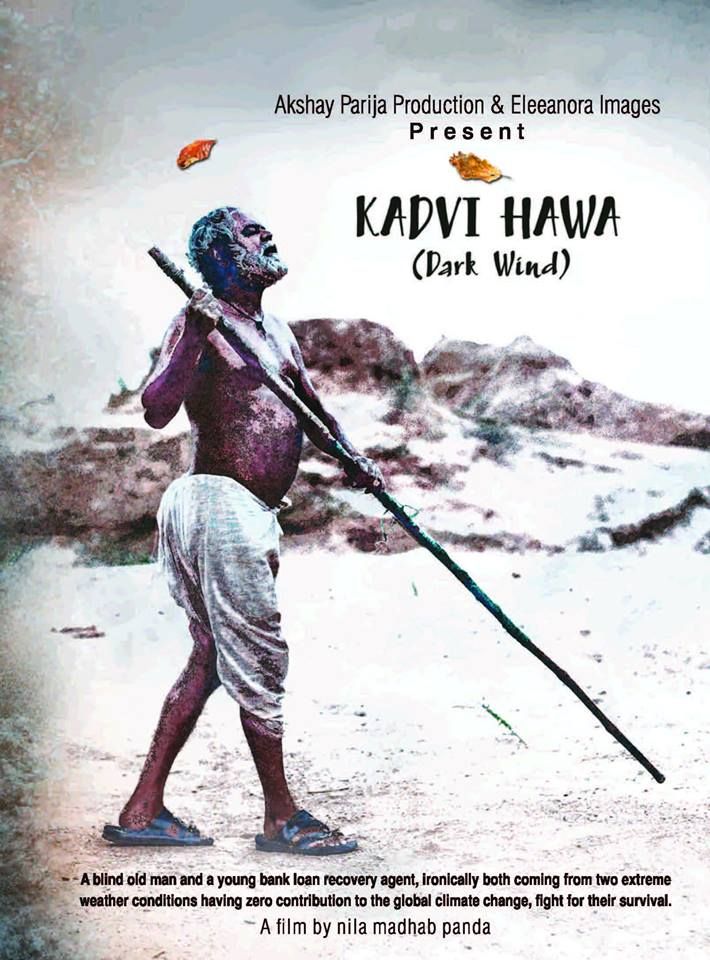 Ranveer Shorey plays an Odia bank clerk (Gunnu Babu) who is often seen doing the rounds of the village of Mahua to collect money from the villagers who haven’t paid their debts. He is called Yamdoot (i.e. God of death) by the villagers and it seems he has lived up to his title because the poor farmers die, leaving the families in a dark corner. He develops an uncanny friendship with the blind village old man called Hedu (Sanjay Mishra). Hedu, although blind and illiterate, is a wise elderly who has seen how the air has changed over time and brought drought and misery to his village, thus the name Kadvi (bitter) Hawa (air).

Hedu helps Gunnu Babu in the collection of bank loan interests by spying on the poor farmers. In one such scene, Hedu informs Gunnu Babu about the village priest who has acquired money and will not lie about it during morning prayer. So, Gunnu Babu must approach the priest during the morning rituals. Hedu helps Gunnu Babu on one condition that Gunnu must never visit Hedu’s house because Hedu’s son, Mukund is under a lot of debt.

“In Odisha, there were seven villages on a coastal line. They were called ‘seven brothers’. But when I reached there, I only saw two of them. I got a shock when I saw two hand-pumps inside water. I heard from people between the 60-70 age group that those hand-pumps were earlier located in the middle of the village.”

— Nila Madhab Panda on the idea behind Kadvi Hawa.

In Kadvi Hawa, Nila Madhab Panda crafts a carefully observed, realistic, and sensitive story on the backdrop of climate change. Sanjay Mishra, who is mainly known for his comedic roles, plays the character of Hedu with utmost diligence and carries the film on his shoulders for almost the entire runtime. Ranveer Shorey quite literally places the devil here. But he also has his share of problems. A scene where he talks about how the floods washed away his house and land, says a lot about the suffering of people in Odisha. Ranvir Shorey’s character Gunnu appears to be evil or “Yamdoot” but by the end of the film, the director manages to evoke sympathy for him too because he is a product of the prevailing conditions.

In a scene where the teacher of a village school asks the class, “How many seasons do we have?”, the whole class answers, “four” because that is what is written in the textbooks. But one of the boys says, “Two, summer and winter”. The headmaster feels uneasy and so does the audience. In this immaculately observed scene, the dangers of climate change are subtly driven home.

Set in a ravine-like landscape, cinematographer, Ramanuj Dutta captures the boundless barren land making it feel like a character that silently watches the farmers’ suicides and the suffering their families go through hence after. Like a Yamdoot (God of death), it keeps a close watch on the next prey.

Although criticized for being a slow burner, the length of this movie or any movie in general that attempts to show deep emotions and spend time on fleshing out the characters rather than extravagant, the edge of the seat editing, should never bother people who are willing to spend time in observing and not just watching films. Kadvi Hawa’s bone-chilling climax will make all of it worth the wait.

Sanjay Mishra who is mainly known for his one-note comic relief characters has always gathered acclaim with his more intense, dramatic roles (Satya, 1988 and Ankhon Dekhi, 2013) and this one is no different. Clad in a shabby, white dhoti for almost the entire film, he pumps sensitivity and empathy into the character of Hedu. Tillotama Shome (Hedu’s daughter in law) and Bhupesh Singh (Hedu’s son) also do justice to their characters. This film will age beautifully and remain relevant for years to come while we constantly battle with nature to gain harmony.