Rabindra (Robin) Dharmaraj (1949-82) was a Journalist, Documentarist and Hindi Director. He started his career as a journalist covering the Vietnam War from the US perspective and worked as a radio newsreader whose ‘BBC voice’ was later used extensively for strident commentaries by Films Division productions. Later, he joined Pentecostal Church and moved to Bombay in 1971. He became an Assistant Director and worked with assisted filmmakers like Fali Bilimoria and Shyam Benegal. After completing a short course in film making in the USA, he returned to Bombay and joined advertising agencies Lintas and Hindustan Thompson.

Rabindra died soon after the first screening of his only feature film Chakra (1981). He was featured as the Director’s Fortnight Director at Cannes Film Festival 1981. 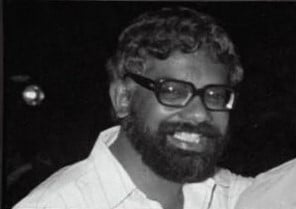 Chakra is a 1981 Hindi film directed by Rabindra (Robin) Dharmaraj, starring Smita Patil and Nasiruddin Shah. The film tells the story of a migrant family that takes refuge in the slums of Dharavi and is slowly sucked into the seedy underbelly of Bombay.